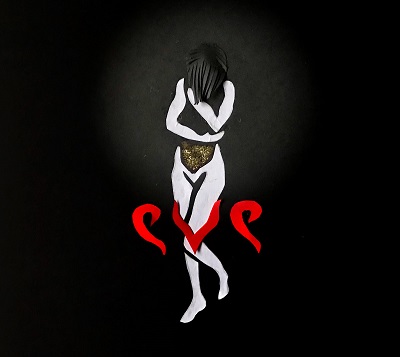 One of my favourite musical discoveries in recent years has been that of the wonderful singer Daria Kulesh who was born in Russia, has been in the UK for the last 15 years, and is from Ingush heritage. I urge anyone who has yet to come across it to seek out her wonderful second album, ‘Long Lost Home’, which tells the tales of Ingushetia. It is no surprise to anyone that she has been impacted deeply by the invasion of Ukraine, and on this year’s Orthodox Christmas Eve, January 6th, she released her new EP. “Celebrated in both Russia and Ukraine, Christmas Eve, also known as Sochelnik, is a pagan-rooted mystical night not unlike All Hallows’ Eve when magic spells – and curses – are believed to be at their most potent. It is the night of women, engaging in strange and dangerous rituals to reveal their future and perhaps even bend and shape their fate. The EP is the cry of a woman, a mother, echoing Eve herself – the mother of us all who remembers a world free from violence. EVE cries out…STOP THE WAR!”

The four-track EP (the digital edition has three tracks, the physical edition four tracks) starts with “Cossack Lullaby”, with Daria initially accompanied just by some bells, singing the song of a mother to her baby boy who will grow up to be a Cossack and go to battle while she stays at home worried, as no mother wants her son to go to war. Originally written in Russian by Mikhail Lermontov it is delicate and haunting, particularly poignant as both Russians and Ukrainians celebrate Cossack heritage. Singing in Russian, Daria takes on the mother’s role, but here it is singing on behalf of all those who have been sent to war and those who are defending their homeland.

Next we have “Masters of War”, the Dylan song originally released nearly 60 years ago. In many ways this is for me the most poignant song on the EP as while the lyrics could well be about Putin, Daria is singing this in a far more English style than I would expect, with loads of venom and I was surprised at just how much she reminds me of Talis Kimberley. It is certainly quite different for her, and is direct and full of passion.

“Lully Lullay” is a contemporary reworking of “Coventry Carol”, a 16th Century song about Herod’s massacre of the innocents. Originally written about her own daughter when she was dangerously ill (she has since fully recovered) this now takes on a far more dramatic slant when placed in the context of the war.

The set ends with “Ukrainian Lullaby”, sung in Ukrainian, where two kindly spirits, Dream and Slumber, are looking for a place to spend the night, eventually choosing a cosy hut with a purring cat and a sleeping baby. The image being portrayed is cast asunder by the thought of what is currently happening throughout Ukraine, and the delicacy of Daria’s vocals are so very different indeed to the sounds the spirits would see if they were there now.

A special mention must be made of Jason Emberton who not only took on a multi-instrumental role (drums, bass, piano, keyboards, synth, strings) and also produced them, with other guests being Stu Hanna (violin – “Cossack Lullaby”), Tristan Seume (guitar – “Cossack Lullaby”), Katrina Davies (violin – “Lully Lullay”), Jonny Dyer (guitar – “Masters of War”), Odette Michell (backing vocals – “Lully Lullay”), while Daria provided guitar and shruti box. The music is always designed to keep Daria’s incredible vocals very much front and centre, and there is a poignancy with this release which is impossible to miss and really makes the listener think and empathise with what is taking place all those miles away.